A Musical By Scott Freiheit

(Based on the Novel by Nathaniel Hawthorne)

"I saw in an American newspaper yesterday, that an opera, still unfinished, had been written on the story of 'The Scarlet Letter,' and that several scenes of it had been performed successfully in New York. I should think it might possibly succeed as an opera, though it would certainly fail as a play." 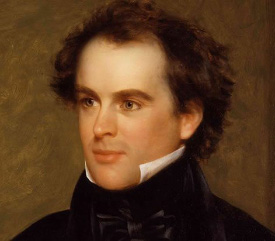 Nathaniel Hawthorne's "The Scarlet Letter" has, indeed, been the inspiration for numerous musical treatments almost from the time of its original publication in 1850. It has also been the subject of a number of dramatic plays and motion pictures. Very few of these efforts, however, have achieved any degree of lasting notoriety, with the possible exception of the 1995 Demi Moore debacle that will probably be on many '10 Worst Films' lists for years to come.

The task of adapting this challenging and complex novel has never been an easy one. Some authors have chosen to "improve" on Hawthorne by adding comic relief or a happy ending. Others have used his dark ambiguity as a vehicle to promote their own social or political agendas. The musical by Scott Freiheit takes a very unique approach...it stays true to the novel! As a result, this version of "The Scarlet Letter" is a very different kind of musical play.

While not an opera in the sense of being completely sung, the score embodies many of the thematic elements associated with "through-composed" pieces. There are very few "songs" in the traditional sense. Dialogue and singing are blended throughout the score in a way that challenges the conventional definition of a book musical. There are no "humorized" characters and no attempt has been made to "lighten up" the story. This is a musical about sin and redemption. About cruelty and love. About strength and weakness and most importantly of all about passion.

I wrote two adapatations of "The Scarlet Letter" almost simultaneously in 1995. One was a musical play and the other was a non-musical screenplay. The screenplay was shopped around Hollywood and got some terric "buzz" and it looked for a time like we would be going into production but the Demi Moore version had been such a complete failure that people started to get cold feet. The logic was if this star-packed version with a big budget didn't suceeed how was some little "indie" version by a guy nobody had ever heard of going to make it? (Which probably explains my harsh bashing of the film in the section above.) We honestly came very close to getting the "green light" but eventually nothig happened and I shifted my attention to the musical.

I made a demo recording of the score and hung some information up on my Undiscovered Musicals web page, much like I'm doing now, and to my surprise I received a fascinating offer. An author and translator in Hungary, Péter Fábri, wanted to do a Hungarian version of the show with his wife, a rather famous Hungarian singer and actress, Kriszta Kovats, playing Hester Prynne. It was much more difficult in the mid 1990's to communicate internationally than it is today but we somehow managed to work together to bring the show to life in Budapest. A tremendous amount of new material was added, which I think improved the show, but unfortunately it sort of rendered the original demo recording rather obsolete. There were so many ups and downs and twists and turns that I can't even remember half of them but finally a date was set. The show was supposed to open on September 10, 1999 at the Erkel Theatre in Budapest, Hungary. Then the producer had money troubles and the whole thing was called off.

Peter and Kriszta tried for years to find another theatre to stage the show but nothing ever came of it. We had hoped to do an English language tour of Europe with the show if the Hungarian production went well but without that as a launching pad that idea also faded away. I did get a trip to Hungary out of the deal and I met some absolutely fantastic people who have become dear friends for life so I don't view the experience as a total failure but the disappointment of having come so close twice, first with the movie, and then with the musical, made me turn away from the project. I have made no effort to promote it or sell it or get it produced since then...until now! So perhaps finding a home on this web page will lead to another exciting discovery by someone.

I'm definitely interested in making un up-to-date recording of the show but that's such a huge task that I'm not sure how soon I'll get around to trying it, if ever. Perhaps if I ever figure out how to run a successful crowd funding campaign I'll give it a shot.