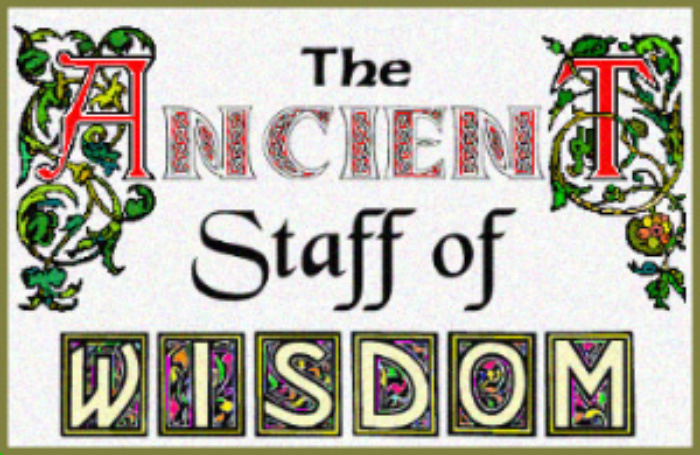 A Musical by Scott Freiheit

The Time: A very long time ago.

The Place: The mythical city-state of Aerondale.

The land of Aerondale was once powerful and prosperous, but in recent years the land had fallen on hard times. According to local legend ("Prologue") a powerful relic, known as the Ancient Staff of Wisdom, was stolen or lost many centuries before and Aerondale has suffered as a result ever since. As a result, all of their resources have been channeled into annual "quests" to recover the Staff. ("This Will Finally Be the Year") Two young field hands, JOHN and ERIC, watch the KNIGHTS preparing to depart on such a quest and wish that they could leave their tedious jobs behind and go along on such a great adventure. ("Why Should We Not Dream?") ERIC, the "ring-leader" of the pair, decides that they should seek out the leaders of Aerondale, known as the REGENTS, and declare their worthiness to participate in the quest.

The head REGENT, BROTHER FINLAY, is somewhat amused and a little impressed by their heartfelt entreaties, but ultimately informs them that they should take comfort in the fact that, in their own way, they are contributing to the quest by working in the fields, helping to harvest the supplies necessary for such a project. JOHN is relieved to escape without punishment for their audacity, but ERIC is not completely satisfied with the results of their interview.

While passing through town ERIC spots the object of his secret desire, a beautiful young woman named JOELLA. Although she, being of noble birth, is definitely "out-of-his league", ERIC refuses to accept the futility of his situation. ("If I Could Be In Love With Her") Gathering his courage, he dares to approach her and profess his love, but she is barely aware of his presence. JOELLA is also the "not-so-secret" object of desire of a very prominent knight, SIR MICHAEL, who rudely pushes ERIC aside.

Back home, in the barn, ERIC broods about the various injustices which they have had to suffer simply because of their station in life. He tries to convince JOHN that they are as worthy as anyone else to go questing for the Ancient Staff of Wisdom, even if they have to do so on their own. ("Fate") JOHN is reluctant, but as always, he finally gives in and the two slip off into the night.

Questing proves to be more difficult work than they had imagined and soon the pair is faced with a very real dilemma. To return empty-handed would mean disgrace and punishment, but to remain in the wilderness much longer would mean starvation. ERIC decides that their only hope is to make something look like the Ancient Staff and try to bluff their way through it, at least long enough to gather some more supplies. Once more he is able to convince his skeptical friend that they have no other choice, and soon they return to town with their counterfeit relic in hand.

ERIC uses his remarkable skill for oratorical persuasion and begins to weave an elaborate tale of their adventures. ("The Enchanted Forest") He tells them that a beautiful ENCHANTRESS in the woods magically appeared to them and offered to guide them on their noble journey, ("The Enchantress") which ultimately led to a great battle with an army of GIANT KNIGHTS. Having defeated the guardians of the Staff, the coveted relic fell into their possession and ERIC finishes his story by triumphantly displaying their bogus icon.

The town is thrust into an uproar. Even most of the skeptics in the community have been moved by ERIC'S eloquence. But in order to legitimize the whole thing it is decided that the REGENTS must be consulted. ERIC, JOHN and their stick of wood are marched off to the High Temple. For the REGENTS, it is quite a thorny issue. With no way to conclusively prove the authenticity of the staff they are reluctant, despite their inclinations, to pronounce it a fraud, considering the severe punishment for such a crime. On the other hand, they realize that after so many years of questing someone was bound to find something. Since the people of Aerondale have suffered through such a long bleak period, they finally decide that in the best interests of the community they will endorse the authenticity of the Staff and declare a holiday. ("Rejoice!")

ERIC and JOHN are suddenly heroes. They are showered with gifts, released from their duties in the field, and honored at a great banquet. ("The Feast") Even JOELLA, once seemingly unreachable, now appears to be quite interested in ERIC, a fact that doesn't escape the attention of SIR MICHAEL, who promises to be a very dangerous rival. Despite the assistance of any magical powers Aerondale is soon on the path to prosperity. The people are once again happy and motivated and the resources, once devoted to the quest, are now channeled into other, more productive public works projects. The REGENTS are thrilled by the turn of events, and plan even bigger and more ambitious projects for the future, despite some lingering fear that the boom is only temporary. ("Can We Be Certain?")

While most of the citizens of Aerondale are experiencing good times, the quest KNIGHTS suddenly find themselves replaced by new heroes ("The Ballad of Eric and John") and essentially unemployed. ("Now They Sing of Someone Else") Their leader, LORD BELTON, decides to take the matter up with BROTHER FINLAY, but SIR MICHAEL has another plan in mind.

Meanwhile, ERIC and JOELLA have become better acquainted. Despite his dream coming true, he can't quite reconcile the fact that before he was famous she didn't even know he existed. Her reply is to say that it doesn't really make any difference why you take an interest in someone as long as your heart tells you it's the right thing to do. ("A Better Reason To Be In Love") Their idyllic afternoon together is suddenly interrupted by JOHN who brings the distressing news that SIR MICHAEL has been caught in the act of trying to steal the Ancient Staff of Wisdom and is going to be tried by the REGENTS for treason. ERIC regretfully tears himself away from JOELLA and he and JOHN hurry back to town.

The news that SIR MICHAEL has been sentenced to death forces ERIC and JOHN to confront their consciences. ("Tell Them The Truth") ERIC is especially reluctant to throw everything away now that he and JOELLA seem to be on the road to happiness, but JOHN is insistent that they must do the right thing, and ultimately, ERIC agrees.

Their confession to BROTHER FINLAY creates more problems than it solves. The REGENTS are reluctant to admit that they had been fooled by a couple of farm boys and the presence of the Staff, real or not, has been very good for the economy. On the other hand, they can hardly put a man to death for attempting to steal a worthless stick of wood. FINLAY takes some time to himself to ponder the tricky situation. ("It's A Difficult Thing")

Finally, in a stroke of Machiavellian genius, FINLAY comes up with a solution. SIR MICHAEL will still be punished for breaking in to the Temple, but his sentence will be reduced. Instead of death, he will be stripped of his titles and forced to work in the fields for ten years as a lesson in humility. JOHN is to be knighted and will join the other KNIGHTS on a new quest, a goodwill mission to neighboring lands to open trade routes and encourage cultural exchanges. And to head the expedition ERIC, a newly appointed member of the REGENTS, will serve as ambassador to Aerondale.

Stunned, but delighted, ERIC seeks JOELLA in the celebrating crowd and they discuss their future. ("Will You Wait For Me?") FINLAY has wrapped things up rather neatly, if not entirely honestly, which at least makes for a happy ending to the musical! ("Finale")